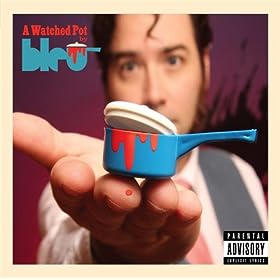 This album is a testament to perseverance. Originally recorded in 2005, Bleu was dropped by his label mere weeks after he finished recording the album. For most, the story – and album – would have ended there. Bleu, however, kept after the label and finally won the rights to release A Watched Pot on his own. Good thing he did as it would be a shame if these songs were permanently lost in a record company vault.

A Watched Pot is a tremendous showcase for Bleu’s talents as a songwriter and musician who is clearly methodical in his approach to music. The album is rich with instrumentation and musical contrasts that give the songs tremendous emotional punch. Quiet verses crescendo to soaring choruses, often punctuated by Bleu’s falsetto and earnest vocals. It all comes together to give his songs a theatrical quality.

“I Won’t Fuck You Over (This Time)” is a great example of this. The song finds Bleu, accompanied by a heavy-handed piano and small backing chorus, making his plea to an unseen lover. The song is satisfying yet leaves the listener wondering what happens in the next scene when his lover responds. “When the Lights Go Out,” a duet with Sandra McCracken, has similar dramatic qualities. One can almost see the two standing on a stage pouring out their hearts.

Things loosen up a bit with “Kiss Me,” an R&B explosion that hearkens back to the hey-day of Motown or Atlantic soul. Bleu more than holds his own although I could easily see someone like the Isley Brothers taking it to frenzied heights.

The album’s stand-out is “Boy Meets Girl,” my pick for song of the summer. What it may lack in lyrical depth it more than makes up for in smile-inducing charm, “It’s like Twisted Sister meets Mister Mister, it’s like ‘Shout at the Devil’ meets ‘Careless Whisper’, it’s like Motorhead and the Grateful Dead in a game of Twister, it’s like boy meets girl.” Truer words, my friends, truer words…

Lest anyone think that he has been slacking these past five years, Bleu also has a special ep featuring some recent tracks and a few b-sides from the A Watched Pot sessions. “Didn’t anyone tell ‘ya that we all get a lot of good use from a bad excuse? A sister, a brother, a father, a mother, a lover, all of us need somebody to blame,” he sings on the hold-over “The Blame Game.” The more recent “Singin’ in Tongues” provides a glimpse of what is to come, a healthy rocker with a sing-along chorus.

For your viewing pleasure, here is the video for the A Watched Pot track “Come ‘N Go” and a special live performance of Michael Jackson’s “Human Nature” that features Bleu and special guest Jim Boggia.