As the saying goes, Life Is Good.  Especially when the agenda of the day involves sitting outdoors, temps in the 70’s with the occasional cloud, listening to music, with the Rockies as a backdrop and the crystal clear, glacier-fed St. Vrain river steps away if you need to cool off.  Such was my plight on  Sunday.  Not that the weather this time of year in Colorado always cooperates–last year is now known as the Rocky Mountain Soaks Festival for all the rain–but this year it certainly did its part.

The musical highlight of the day occurred early in the afternoon with a solo performance by Ben Sollee and his cello, Kay.  Using techniques including the traditional bow, but also picking the strings with guitar fingerpicks, Sollee demonstrated why he’s so in demand by musicians pushing the envelope.  With stints in The Sparrow Quartet, Vienna Teng, Woodsongs musical hour as house cellist, and his own recordings, Ben has a tremendous variety of music to choose from.  He stretched those boundaries Sunday with everything from the bluesy Bury Me With My Car to a version of the Cat Steven’s classic Wild World.  The crowd favorite seemed to be Chocolate Jesus: everyone needs one. 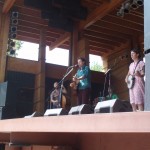 A surprise to me was Blind Pilot, the Portland, OR, based vehicle for Israel Nebeker and Ryan Dobrowski.  They were playing with 4 extra musicians and the collection of instruments gave them some great options.  Vibraphone, trumpet, and ukele were featured on a single song, for instance.  This group is clearly an up-and-comer in the indie folk scene.

A nice counter balance to the day’s folk focus was Australian singer/guitarist Mia Dyson.  With a decidedly blues and roots rock set list, the raw emotion she coaxed out of her Stratocaster reminded a couple of us of 60’s era Keith Richards.  Her cover of Lucinda William’s Can’t Let Go and the LIttle Feat classic Willin‘ were highlights, but her own compositions also carried their weight.

I had to leave early and was going to miss Gillian Welch, but fortunately she and Dave Rawlins came out and played with M. Ward for several songs.  Fortunate not just because I got to see them, but also to pull Ward out of a set list that wasn’t winning in the war against a nap in the warm sun for a lot of festival goers.

So there you have it.  A day of fun in the sun filled with music.  Life Is Good.