Spills and Thrills, by John Paul Keith & the One Four Fives 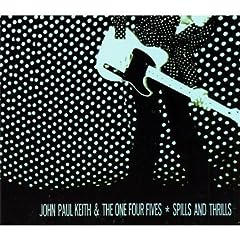 Last month we highlighted ex-V-Roy Scott Miller’s latest release, this month it is his former band-mate John Paul Keith’s turn. Keith’s latest is a rockabilly romp, heavy on Southern boogie and down-home fun. The party gets started with the rollicking “Lookin’ For a Thrill” in which Keith exclaims that he “found a whole lotta trouble when I was lookin’ for a thrill.” The One-Four-Fives are a musical force throughout: organ and piano collide to give “If I Were You” a tremendous dance-hall fervor while a lap steel guitar leads the way on the ambling “Otherwise.“ Keith and company pay tribute to some of the masters with the slick Booker T. groove of “Cookie Bones” and the Jerry Lee Lewis feel to “Pure Cane Sugar.” The album ends on a high note with the “Doin’ the Devil’s Work.” “I’m tired of clockin’ in for the wages of sin,” proclaims Keith while the band drives the point home with a furious rockabilly beat.

Audio Download: John Paul Keith and the One Four Fives, “If I Were You”

THE PLAYLIST:
To Live Is to Fly, Steve Earle (from the New West Records release Townes)
Earle pays tribute to his friend and mentor Townes Van Zandt with a collection of covers. You can hear the sincerity and affection on every track. I find myself gravitating towards this one, which so eloquently captures Van Zandt’s talent and wanderlust, “Goodbye to all my friends, its time to go again, think of all the poetry, and the pickin down the line gentle.”

Audio Download: Steve Earle, “To Live Is to Fly”

Burgundy Red, Tim Easton (from the New West Records release Porcupine)
His last few outings have tended towards the folk end of the spectrum, but Easton let’s loose with tis bluesy rocker. The drums set a heavy percussive beat while the guitars howl as if possessed.

Cry, Slaid Cleaves (from the Music Road records release Everything You Love Will Be Taken Away)
Between a dream and a lie, between hope and what’s real, after so many years of “let’s work it out” you’d think there’d be some kind of a deal. Between the rum and the glass, between the teeth and the tongue, come December when the lights go out you know you can’t count on anyone.

Like a Dog, Annie & the Beekeepers (from the self-released Squid Hell Sessions ep)
The Boston folk quartet captivate with their rich harmonies and gentle melodies, anchored by singer Annie Lynch’s quietly confident voice. “Like the ticking of a clock, the unwinding of a watch, our time keeps moving along.”

Walk of Shame, Jack-O & The Tennessee Tearjerkers (from the Goner Records release The Disco Outlaw)
If you like garage rock with just the slightest Southern touch, then Memphis musician Jack Oblivian nee Yarber is your guy. This ode to everyone’s favorite morning stroll tends more towards the pop end of the spectrum without losing the grit of the garage. “There’s no hall of fame on this walk of shame.”

The End, John Wesley Harding (from the Popover release Who Was Changed & Who Was Dead)
Many people prefer Harding’s folk leanings but I’ve always been partial to his power pop. His latest hits the mark with backing from the Minus Five (Peter Buck, Scott MacCaughey) and Harding’s typical entertaining word-play.