Thibaud is a roots rock everyman, routinely cranking out hearty workingman’s music. His latest continues his streak of satisfying releases. Thibaud is at his best when he takes on the emotional conflicts of people grappling with their everyday lives. His lyrics capture their internal conflict yet keep enough distance to remain objective. “Simple Man” is a great example, a slow-burning song made even more potent by an ominous-sounding organ and acoustic slide guitar. “I’m a desperate man, the dangerous kind,” he sings, “I can see the painful truth but still I’m blind.” Similarly, the title track bristles with the emotion of a man coping with a failed relationship, seemingly honest with himself in the lyrics yet with a similarly charged musical undercurrent. Guest vocalists Bill Janovitz (Buffalo Tom) and Lori McKenna lend their considerable talents to several of the tracks, their distinctive voices adding extra depth to Thibaud’s lyrics. In the end, however, it is Thibaud and his songwriting that shines brightest. [Note: This album is currently available only at live shows. You can stream additional selections on Thibaud’s myspace page.] 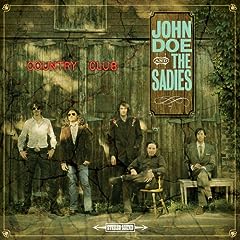 “Country Club is the result of a drunken promise or threat I made to Travis & Dallas [Good, of The Sadies] the first night we played together in Toronto,” explains John Doe. And what impressive results they are. Doe has one of those impressive voices that lends itself to any genre while the Sadies have a well-deserved reputation for classic country sounds. Together, they mine for gold in classic 1960’s and early 1970’s country. Doe and company swagger through the Waylon Jenning’s hit “Stop the World and Let Me Off” and a faithful take on Johnny Cash’s “I Still Miss Someone.” Their quiet take on Kris Kristofferson’s “ Help Me Make It Through the Night” is a pleasant reminder of the songwriter’s impressive talent. Not to be outdone, the handful of originals – most notably Doe and Exene Cervenka’s “It Just Dawned on Me” (featuring Kathleen Edwards) – fit in the mix perfectly. If it entices you to do a sequel, the next round is on me boys…

Audio Download: John Doe & the Sadies, “It Just Dawned On Me”

Water to Wine, by Nakia 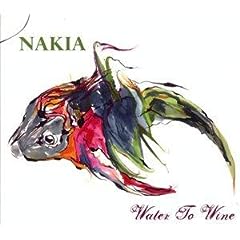 Southern soul is a special thing. Alternatively inspirational and sinful, it is always engaging. Exhibit A is Austin soulman Nakia, who book-ends his debut full release with “Choose Your Poison,” a down and dirty ode to guilty pleasures and “Safe Inside” a gospel ballad. In between are eight tracks that showcase the breadth of Nakia’s talent. He brings an intoxicating swagger to the love song “Make Love Mine Tonight” but quickly works up a soulful fervor over a break-up in “All Over You.” Among the other stand-outs is “World of Love,” a gospel laced ballad interspersed with some Duane Allman-influenced guitar. Backed by his impressive band the Southern Cousins and singers the Fresh Up Girls, consider this a welcome introduction to a tremendous talent.

THE PLAYLIST:
Cryin’ Time, Eric Lindell (from the Alligator Records release Gulf Coast Highway)
Lindell picks up right where he left off with 2008’s excellent Low on Cash, Rich in Love. He takes a classic 1960’s rhythm-and-blues groove and mixes in some New Orleans soul to kick-start the party.
https://twangville.com/970/mayers-playlist-for-july-2008-part-1/

Shook Down, The Dead Satellites
A new band featuring Matthew Ryan alongside Rami Jaffee and Greg Richling (of the Wallflowers) debuts a powerful song reflecting on how the economic crisis has impacted everyday workers. Jaffee’s piano matching Ryan’s vocals on the melody give the song a haunting feel. Download the song here.

California on my Mind, Wild Light (from the StarTime International release Adult Nights)
I’m not really sure why New Hampshire’s Wild Light have against California (“Fuck today, Fuck San Francisco, Fuck California”), but this song is darn catchy.

A Choppy, Yet Sincere Apology, the Riverboat Gamblers (from the Volcom Entertainment release Underneath the Owl)
This song would have made the playlist based on title alone. Even better it is a guitar-fueled blast that emphasizes the “choppy” over the “sincere.”

Backseat, Teddy Goldstein (from the self-released Backseat)
I’m never quite sure how to classify Goldstein. Is he a folk artist or a pop singer-songwriter? I suppose that it doesn’t really matter when he combines acoustic guitar and sharp lyrics into tuneful pop gems.

Killer Parties, The Hold Steady (from the Vagrant Records release A Positive Rage)
“Sometimes, I might happen to tend to talk to much. Everyone has their faults. I’m in a twelve-step program as we speak for it… it’s called shutting up,” says singer Craig Finn before the band kicks into an epic take on this ballad masquerading as a rock song. Hey, you can talk the talk if you can walk the walk. If you need an introduction to the joyous rock and roll of Brooklyn’s the Hold Steady, look no farther than their latest live release.