It’s a tad ironic that I first saw Wild Light perform at a party hosted by Paste, since it’s Rolling Stone, the grande dame of rock rags which I have to thank for putting Wild Light on my radar. Since Wild Light wasn’t one of the bands that chose to include an .mp3 on the South-by site, I’d have very likely missed them since I use the torrent of those collected .mp3s as my primary decision-making tool as regards which new-to-me bands I’ll be checking out each year. Thankfully, the “Breaking” write-up in the Stone brought the band to my attention which, in turn, led me to Wild Light’s MySpace, where I found myself digging each and every tune. 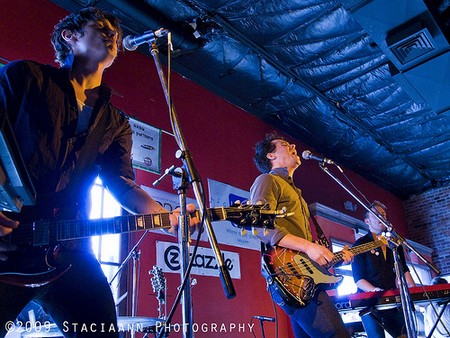 As it turned out, Wild Light were my inaugural band of this year’s South-by, since I caught their afternoon set at the Paste party shortly after dropping my bags in the hotel and racing to the venue. The fact that they’re on this list of highlights should serve as ample indication of what a fine start my South-by got off to this year. Kicking off their very strong set of songs (not a single weak tune in the bunch) with a song called, appropriately enough, “The Party,” it seemed to me at times during their set that these newcomers may have set their sights on becoming indie rock’s answer to the Killers, with ringing pop harmonies and sharp guitar and synth hooks prominently featured on most songs. The foursome features three vocalists (though two appear to be the primaries), each of whom swap instruments (keyboards, guitar, and bass) throughout the set, with only the drummer remaining at his post throughout. The dazzling set closer, “Call Home,” finds the band taking an unexpected turn towards Arcade Fire territory, doing so both successfully and convincingly with group-shouted vocals for the entire song. It was a rousing conclusion to an already arresting set, and my South-by was already a “Party.”

Check out Wild Light’s first official video, “California on My Mind,” a song which isn’t likely to gain these sons of New Hampshire a legion of California-based fans:

I should also mention that I was so taken with Wild Light at the Paste party that I went back for seconds, catching their official showcase at Emo’s the next night. That longer set was graced with several additional songs from their just-released debut, Adult Nights, which you can bet I’ll be picking up soon.