The South-by countdown clock reset around 2 a.m. on the morning of Monday, March 23, as the last chords of Alejandro Escovedo’s traditional closing night South-by show at the Continental Club rang out. The wake concluded with a typically majestic reading of “Sway” (a song that Al stole from the Rolling Stones many years ago and, in the opinion of your humble correspondent, has been the sole and rightful owner of the song ever since). At that moment, SXSW 2009 had officially reached its end, and it was almost time for the faithful to return to the “real” world … albeit somewhat comforted by the happy thought that SXSW 2010 was just over 51 weeks away. 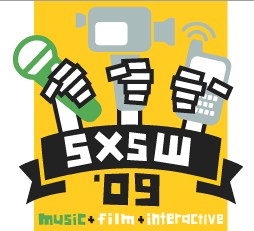 That’s the tale of the bittersweet final moments of another majestic five days and nights in Austin, filled with the power and the glory of live music, but I’m here to celebrate the highlights of those preceding five days and nights. And if you think you’ve heard the last of the incomparable Mr. Escovedo, think again as, along with a 15-piece “orchestra,” he performed on Friday night what was, bar none, the finest show of the week – and one of the finest shows I’ve ever been privileged to witness by any artist in over 25 years of going to shows.

I’ll return to tell that tale in due course, but I’d like to begin my highlight reel of the best sets I caught this year by recounting the top 5 acts I saw perform at day parties. For the uninitiated, one of the (countless) joys of South-by is the day parties which take place each day of the festival, providing a shadow South-by of sorts, serving to both complement and enhance the official nighttime showcases. Variously hosted by venues, labels, blogs, even countries, there are dozens of competing day parties each day, both official (i.e., sanctioned by SXSW) and unofficial, with the vast majority of them providing free beer, and many of them providing free food as well. Needless to say, free booze and eats aside, the main attraction at any given day party is the lineup of performing bands. And so, without further ado, here are the top five bands I caught at day parties this year (Note: direct links to the posts dedicated to each set are included below):

I feel like I may have tested the limits of unconventional-for-Twangville artist recommendations with my day party highlights this year, but it’s entirely possible that I’ll blow whatever remains of my credibility with my showcase highlights. Such is the nature of my concern that I feel the need to remind the patient Twangville audience again that I will be wrapping up my 2009 SXSW coverage with a blog entirely dedicated to my pick for South-by Set of the Year, the Alejandro Escovedo Orchestra performance that was so otherworldly that the term “highlight” simply doesn’t do it justice. In the meantime, I hope you’ll kindly indulge my need to tell you about the top five showcasing artists I’m compelled to rave about this year. As with my day party highlights, dedicated posts for each of these showcase highlights are linked below: