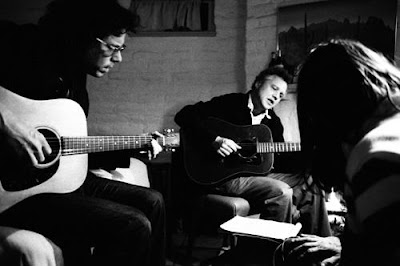 Some songwriting teams are made to be together. No doubt Mark Olson and Gary Louris established themselves as such a team with the early Jayhawks albums Hollywood Town Hall and Tomorrow the Green Grass. They established themselves along with Farrar and Tweedy of Uncle Tupelo as leaders in the Alt- Country phenomenon of the 90s. The problem with songwriting partnerships is that egos and creative differences more often than not create tensions that can not be overcome (see Lennon and McCartney for example). The Jayhawks lost Olson and Uncle Tupelo could not overcome the clash of egos. It is highly doubtful we will ever see a reunion of Farrar and Tweedy. Thankfully time seems to have healed wounds for Olson and Louris. As a result they have provided us with a memorable reunion.

Ready for the Flood shows us what we have missed, and what a sweet reminder it is. The album is a decidedly mellow and subdued reunion that showcases the duo’s harmonizing formula. The natural fusion of their voices has not been diminished by time or absence. In fact, songs like “Bicycle” will stop you dead in your tracks They have written and toured together recently and that certainly helped, but there is something organic that happens musically with these two on songs like “Doves and Stones,” and the most upbeat tune on the album “Chamberlain, SD.” Though the album is a bit melancholy it is a pure joy for listening. The album was produced by Chris Robinson of Black Crowes and will be released on January 27th. Welcome Back!

This review also appears on Amber Waves of Twang