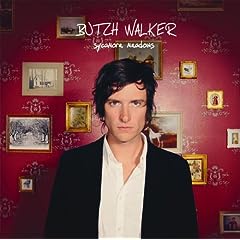 Are you familiar with the old adage of giving an artist the hook? It usually signifies the need to drag a talentless performer from the stage. For Butch Walker, however, it carries a whole different meaning. Walker has established a reputation for sharing his hooks with artists ranging from Avril Lavigne to Pink. Fortunately he has kept more than a few for himself. Sycamore Meadows is a much more nuanced album that Walker’s recent releases, yet it still brims with his hallmark pop melodies. Walker is a master of the angst-filled pop song, well represented here by the break-up ballads “Ships in a Bottle” and “Here Comes the Heartache.” Frequent collaborator Pink joins him on the latter track and the melancholy chorus, “Here comes the heartache, the move out date, the excuses for my friends; Here comes the reason I have to justify It was better in the end.” More upbeat tracks, including album opener “The Weight of Her” and “Ponce De Leon Avenue,” are downright smile-inducing. The album’s focal point is “Going Back/Going Home,” Walker’s reflection on losing all his possessions in the Southern California wildfires last November. “Lessons get disguised sometimes,” he muses, “but all I know is I finally know the difference between going back and going home.” Sycamore Meadows is named for the street on which Walker was living prior to the fires.

THE PLAYLIST:
Faster, Rachel Yamagata (from the Warner Brothers release Elephants… Teeth Sinking Into Heart)
Yamagata’s latest is an album in two parts or rather two personalities. This track is from the angry rock portion of the album that finds Yamagata standing strong, “I’m going faster, you’re going backward, you’re going to miss me when I’m gone.”

Chambers, Ben Nichols (from the album The Last Pale Light in the West)
Nichols is a deceptive character. His live performances with Lucero are whisky-fueled and raucous in the Replacements tradition. As a songwriter, however, his literary skills are sobering. His latest solo release features songs inspired by the Cormac McCarthy novel Blood Meridian. The raw and descriptive tales are brought to life by Nichol’s gravely voice.

2 Sinners in the Garden, David Garza (from the album Dream Delay)
Austin’s David Garza is one of those unique musicians who is adept at a variety of styles. From rock to traditional Mexican folk From It is no surprise to learn that David Garza paints in addition to songwriting. His songs have a visual quality to them, like dreamscapes filled with imagery.

Three Weeks To Go, Dirty Truckers (from the album Loose in the Joints)
Boston’s Dirty Truckers step right out of the garage and
Lead Trucker Tom Baker writes deceptively sweet melodies that he then roughs up with the band. It is a glorious thing and all are strongly urged to follow the band’s directive that the album is “Made to be played LOUDER.”

Come on Over (Turn Me On), Isobel Campbell and Mark Lanegan (from the Vagrant release Sunday at Devil Dirt)
The mix of Isobel’s sultry voice and Lanegan’s gruff voice magically transport you to a smoky jazz club on this bluesy ballad. Grab a whisky and let yourself go – you won’t be disappointed.

Little Bit of Feel Good, Jamie Lidell (from the Warp Records release Jim)
Get your groove on with some fine R&B and “Please don’t make my feel good go away.”