Misadventures in Stereo, by Jim Boggia 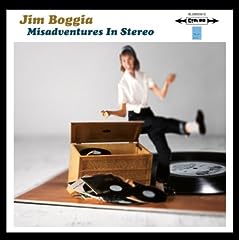 Jim Boggia is a pop classicist extraordinaire. He takes simple and sublime melodies and packages them in intricate yet accessible arrangements. It is a skill to admire and a treat to enjoy. Take “To and Fro,” a rollicking ode to complicated relationships in which Boggia exclaims, “You say you’re leaving but you never go, why are you keeping up this to and fro.” The song is centered around Boggia’s acoustic guitar but you’ll find some tasty bass lines, a heavy dose of castanets and an orchestral piano to provide extra flair. The ballad “Nothing’s Changed” has an emotional charge that belies its title as Boggia laments, “Every day I wake and nothing’s changed, where is the life that I thought I would be leading before this endless years conceding.” The album tends towards the mellow side but Boggia and company let the guitars loose on a rousing ode to the long lost 8-track tape, complete with a surprise song-ending confession. The album wraps up with “Three Weeks Shy,” a moving anti-war song. Similar to Jason Isbell’s “Dress Blues” Boggia chronicles the family of a soldier killed just prior to his return. The concluding spoken list of lost soldiers is gut-wrenching.

THE PLAYLIST:
You Gotta Be a Buddha in a Place Like This, Willie Nile (from the River House Records release Live from the Streets of New York)
If you ever wondered what happens with timeless rock songs are performed by a fiery rock ensemble then don’t miss this. This show was recorded to celebrate the release of Nile’s 2007 classic Streets of New York and should be required listening for any up-and-coming rock band looking to learn how to inject energy into their performances. Besides, how could you not appreciate a song with a title like this?

Feels Like Home, Randy Newman (from the Nonesuch Records release Harps and Angels)
Randy Newman is a sentimental favorite for me despite the fact that Newman can be anything but sentimental. Nonetheless, Newman exposes his romantic side with this beautiful and touching ballad. “There’s something in your voice, makes my heart beat fast, hope this feeling lasts, the rest of my life.”

Mission Accomplished (Because You Gotta Have Faith), Todd Snider (from the Aimless Records release Peace Queer)
“Will Rogers said he never met a man he didn’t like, wait let me back up and make sure I got that right. He might have liked every man he ever met that’s true, but he never said he liked every man that he ever knew.”

Hell Ain’t Half Full, Chris Knight (from the album Heart of Stone)
Kentucky’s Knight continues to build on his reputation as a great Southern storyteller on this touching acoustic lament. See Chip’s full review here.

Charlotte, Air Traffic (from the Astralwerks release Fractured Life)
A percussive guitar riff sets the tone for this forceful alternative rocker. Singer Chris Wall’s vocals drip with angst as he sings, “Lately I can’t find the eyes to help me realize that I’m in love.”

Burned in Place, Broken River Prophet (from the Shark Attack! Music release With Infinite Arms to Cradle the Flames)
The Boston music collective displays a dark and dirty side on this song that simmers with a forceful urgency. A brooding guitar hook opens the track and is quickly joined by a persistent heavy beat against which singers Adam Brilla and Deborah Warfield paint their shadowy vocals.

Murder in the City, Avett Brothers (from the Ramseur Records ep The Second Gleam)
In a triumph of talent properly recognized, North Carolina’s Avett Brothers recently signed to American/Columbia Records and will be working on their new release with Rick Rubin. In the meantime, feel free to snack on this beautiful ballad from their recently released ep.

FROM THE ARCHIVES
I’m an Adult Now, The Pursuit of Happiness
A lost late 80’s gem with the classic line, “No more boy meets girl, boy loses girl, more like man tries to figure out what the hell went wrong.”